Great, day 16. Today, I want to hit my goal of reading 50 pages. I’m currently at the start of Chapter 20. 50 Pages is actually just short of the index. Cool!

Sending something over I/O

Some patterns the author thinks you need to know:

The last two chapters are about books about pattern and writing your own patterns.

One last word from the author:

Please don’t hype patterns, though. I remember too well the days when we were told that “[pick your innovation] would save the world,” only to later find that, although it was a useful tool, it wasn’t the last word in software.

Wow, that was surprisingly good! Really great book! It was completely different to the other pattern books. Less emphasis on the ‘coding’ part and more learning about the problem and a general view on implementing them. I also liked that it doesn’t just contain design patterns. Recommended!

I think for the sake of completeness it would be a good idea to write individual posts for all the books I read in the past 2 weeks. Let’s do this!

So, I’ve written the first 4 super short reviews. I’ll probably write a few more the next days. Also I’m going to write these immediately after I read the book.

And I’ve written the last 6 ones. I also noticed that I have a big backlog of notes on books from this year. I’ll probably publish them when my Way to PHP get shorter.

After my new view on patterns I looked for books related to the last one and found Elemental Design Patterns by Jason McColm Smith. I don’t know much about the book but the reviews were good.

The idea is to find the underlying principles which I quite like. I think SOLID captures most principles pretty good but I’m open for a better way.

Tribal wisdom is what design patterns were intended to collect. Sadly, they are frequently (mis)treated as tribal mythology, by applying the how without a clear comprehension of the why.

As I read his first and, at least within the software engineering community, least-cited treatise on design patterns, Notes on the Synthesis of Form, I realized something important had been lost: patterns are concepts, not constructs

He reduced the list of interesting elements of programming to:

Then he looks on how similar objects and methods are. Which brings us to the last part the design space. 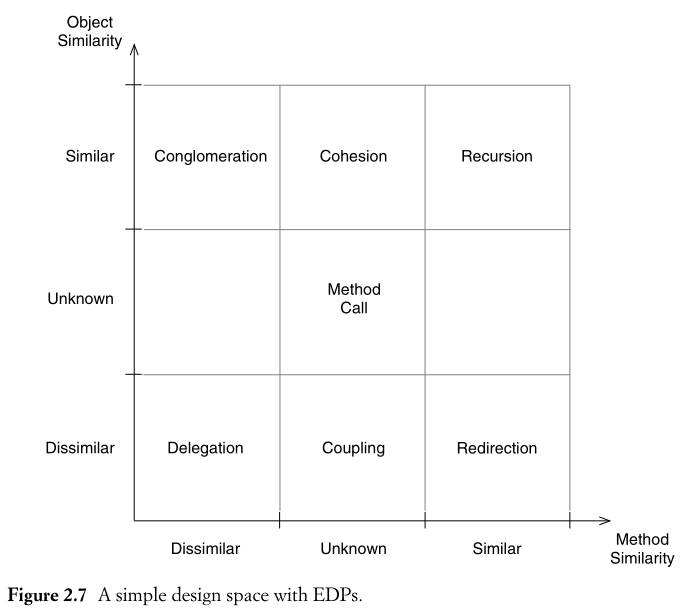 That’s rather interesting. He looks at the similarities of objects and functions and so creates a taxonomy of EDPs: 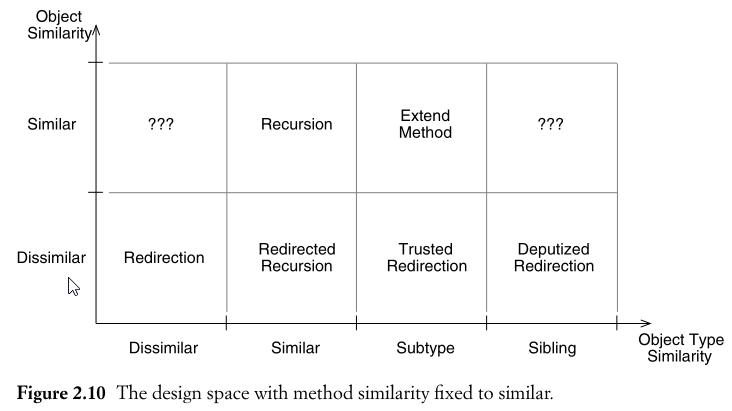 The names are pretty self-explaining.

The idea is to create a simpler notation for patterns.

It has a name (name of the pattern) and is surrounded by a thick gray border which can include the collaborators of a pattern. It’s pretty neat and easy to read.

Here he shows how to construct a new pattern from other patterns. He used the PINbox for that and it really shows its beauty. Once, the idea of the PINboxes are great. Secondly, I love how he constructs things from smaller things. Like the lambda calculus.

He defends his approach but I think it’s better than the current one. Simplicity and abstraction hinders someone from thinking too much in implementation but supports thinking in concepts.

The section on refactoring is super interesting. He shows how a simple refactoring of extracting the method changes the EDP. His approach sounds like some deep insight for static code analysis.

I really wonder how that idea will develop over time and if we see production ready systems which help to refactor code on a design level in the next 10 – 20 years. That would be insane.

Chapter 5 presents a catalogue of EDPs. Chapter 6 then introduces intermediate pattern which are made up of EDPs but are useful for more ‘traditional’ design patterns.

Chapter 7: Gang of Four Pattern Compositions. I really like the examples in this (short) chapter. He shows how you can use EDPs and intermediate patterns to create GoF patterns. The examples are simple and understandable. Especially interesting was the similarity between patterns which matched my observation of the past.

I really felt that understanding these basic elements helped me to gasp the idea of pattern better. It also gave me insight into some of my observations. I felt that I had missed something but the more I read about all the stuff the more I see that there are people trying to make patterns mysterious but really they aren’t.

The last chapter, which is the appendix covers the rho-calculus. I didn’t go into that. Maybe when I have some interest in it but not know.

Nonetheless, the book was really good!

So, I spent some time again on my project. It’s taking shape. The organization is now a bit better. I started to write the README file. It’s pretty good now. Just a few tweaks then I can test it on my live server.

I wanted to watch one talk today and just decided to take the oldest in my watch list:

The first 200 milliseconds of HTTPS

The speaker was quite opinionated on CAs. Here’s a discussion I recommend on that topic featuring Whitfield Diffie and Moxie: