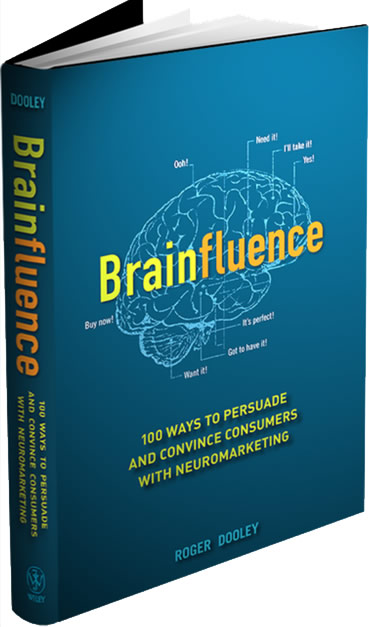 Scents can affect behavior and consumer perceptions. One experiment showed that nightclub patrons danced longer when the venue was scented with orange, peppermint, and seawater. […]
A test in a casino found that people gambled 45 percent more money in a slot machine when a pleasant scent was introduced into the area.

To beat these ingrained consumer perceptions, Nestle first launched upscale coffee shops in major cities for the primary purpose of creating the high-intensity sensory experience people expect […]
The second thing they did was modify the home espresso-making system to release more aroma. This is brilliant and, I can testify, often overlooked strategy.

A classical sound track caused a 233 percent jump in bank goer’s perception of the bank as “inspiring”, compared with their perception when no music was playing.

The researchers found that guys studying bikini-clad girls make worse decisions when presented with a monetary offer.
To begin with, this effect seems to be a short-term one that would be most effective at the point of purchase. The ideal selling situation, no doubt, would be to have bikini-clad babe selling to the guys in person.

Researchers at Northwestern University and the University of California, Berkeley, led by Hal Ersner-Hershfield found that having subjects visualize historical alternatives made them more patriotic. Similarly, reflecting on the shaky origins of a company made its employees more positive about the firm.
[…]
But, if you avoid the ham-fisted approach and are subtle in introducing alternative scenarios, you will produce the desired positive boost in loyalty and emotion without alienating the other person.

Assuming your product or service is purchased frequently enough, offer your customers a loyalty program. They do work. In addition, keep your customers engaged by letting them monitor their progress and, if possible, reminding them about the program if they haven’t bought in a while.
Beyond the loyalty effect, merely exposing customers to point values at the time of purchase can amplify the effectiveness of the loyalty program. Want to encourage sampling of a new produce or drive upgrades? Try something along the lines of, “1000 extra Rewards Points with every purchase”. Note that bigger numbers may seem more important to consumers, so a little pint inflation could be a good thing.

In Blink, Malcom Galdwell notes that most people who suffer an injury due to doctor negligence don’t use. Based on extensive interviews of injured patients, it turns out that patients who sue have often felt like they were rushed, ignored, or otherwise treated poorly by their physician.
This belief, in turn, is based on the quantity of time spent and the quality of that interactions.

In marketing situations you can still stay honest by using targeted pitches. For example, “As an owner of a Platinum Class suit, you showed you are an individual who can recognize sophisticated styling and superb quality …”

It turns out that the way companies respond to bad online reviews makes a difference too. A Harris survey showed that 18 percent of those who posted a negative review of the merchant and received a reply ultimately became loyal customers and bought more.
In addition, nearly 70 percent of those consumers receiving replies reversed the negative content either by deleting the bad review or posting a second positive one.

Peck and Shu found that touching an object immediately improved both the level of perceived ownership and positive emotion.

It turns out that reciprocity strategy can work better; give visitors the info they want and then ask for their information. Italian researchers found that twice as many visitors gave up their contact data if they were able to access the information first.

Brainfluence is such a great book, it’s nearly unbelievable. I would recommend this book to everyone who’s interested in marketing, customer service or just plain psychology. It’s a nice read, the chapters are short and backed by data. Awesome book & recommendation!

All of this business about paid tools vs free tools, and dare I say the whole concept of #measure, all boils down to the fact that today, we are a tool-centric industry, often to the detriment of being an expert-centric industry. — Stop giving web analytics tools the credit YOU deserve

Atlanta Analytics is a quite interesting blog – however, there aren’t so many posts. The author, Evan LaPointe, does have some nice visions and an interesting perspective, because he comes from a finance background.
I think he makes some important points, these are:

What is web analytics?

3.5 things that keep you from finding good web analytics people

This is a handmade description for yet another propellerhead analyst who will sit around and run reports for people, get in arguments with other people (or those same people), “agree to disagree” with other departments, and will eventually call everyone else an idiot and will recede into their cave before ultimately quitting for a director-level position at a different, big, resume-enhancing company where the process will repeat itself.

It’s not their fault because a good position for a web analytics person does not exist in the companies that can use these people most. The bigger the company, the more important a small difference becomes. For a site with 10,000 visits a month, an analytics person would have to improve conversion by double-digit percentages to scarcely pay for themselves. For Wal Mart, moving the conversion needle a tenth of a percent probably pays their lifetime salary in a week

The effective web analytics person knows usability, they know some design, they know information architecture, they know HTML, they are good communicators and can thusly write good web copy, and ultimately they are businesspeople who realize the purpose behind all of these crafts is cash flow […] Rather than being careful, politically aware employees, effective analytics people are data-driven, quickdraw decision makers because they have two key assets:

1. Cold, hard facts in the form of data (and I don’t mean just Omniture data)
2. The ability to not have to decide: they can TEST

Big companies are ruled by coalitions of opinions, meetings, conference calls, and semi-educated executives. Data is actually a threat. Data is what gets people fired in big companies, not what gets them bonuses. Data is scary.

What are the REAL web analytics tools?

Have you lost faith in web analytics?

The purpose of web (or any) analytics

This comment started me thinking about GUI design again:

This incident strikes me as a glaring example of how broken web design is.

A simple page like that should be easier and faster to create from scratch using a WYSIWYG tool, and then publish to a web platform that support it…. than copying the source and then editing it in a text editor.

I know in the past such WYSIWYG tools were too rigid and thus we have a generation of designers that work in text…. but it just seems so archaic to me.

Like building images with text, rather than using photoshop. — nirvana on hn

I completely agree with nirvana. Just think about it. Web designers still have code their designs, the existing WYSIWSG editors pretty much suck and make the process more difficult than writing HTML code with a text editor.

Imagine a world where this whole process of slicing, coding and cross-browser testing won’t exist anymore. This would be pretty awesome. Just create your design in Photoshop, export the .psd file into the application and specify the behavior of the resulting html file, possibly with customization for various template engines like WordPress, Drupal, RoR or Django. That would be awesome. The resulting code should be small and work on all current browsers.

I saw some auto-generated html code and often it’s pretty terrible. Why not start off with simple grid frameworks and define semantic elements a priori. Most websites share common elements like content, navigation, a footer or info boxes.

That’s one thing I’d love to see, so if somebody want to accept the challenge, go ahead! If you want to immerse yourself in design, this is the ideal starting point. William Lidwell, Kritina Holden and Jill Butler show you over 100 different principles of design, including the Golden Ratio, prototyping, the mental model and framing.

Gestalt theory of perception: The theory includes some interesting observations. One is the ground-object-relationship. You probably know the vase which also looks like two faces. This is an application of this principle. Would you make the vase look more like a actual object, e.g. coloring it, it would become the object and the white space the ground. It is a pretty big topic, so if you want to learn more about the theory there is nice short website about it.

Fitts’ Law: This law applies is peculiar important in usability. It states that the time which takes to reach a element (e.g. a button) depends on the distance and size of it. That is, if you want to minimize the time for your user, you could make your site narrower or just increase the size of the buttons.

Face-Ism Ratio: The ratio is pretty exciting. Researchers found that the ratio of the height of all visible body parts to the height of the head determines how the person looks. If the ratio is high, you look more intelligent, dominant and competent. If you start to decrease the ratio you will look more sensual and attractive.

Universal Principles of Design is a pretty nice book. The layout is great. There is explanatory text on the left and examples and illustrations on the right. That is, each principle is explained on one page. And there are lots of it of various topics. If you are interested in design, you should consider reading this book.