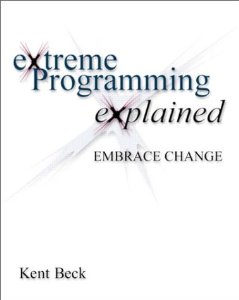 I learned about Agile and XP the first time from a talk by Volker Birk. When I first heard it I was astonished. One of the most salient things was the focus on the people. I heard about the waterfall model before that it was very process driven. But in his lecture he emphasized how important the team is.

While I worked as a quality manager I started off with the typical literature and it still focuses a bit on the people but – understandably – more on the process. And I think that a good process works better than a bad one. But in fields of design / craft like software development or graphic design I’m now more convinced that people matter a ton.

While reading books about software development on the ‘management’ side I’ve seen over and over again that people matter. I think it’s one of the truths which are just hard to swallow and therefore some people try to ignore it. Coming up with new methodologies, patterns, etc.

That is, I’d rather have my product developed but a small but great team than by a big but average one. Every time.

It goes against the egalitarian idea of ‘everyone is equal’. But there are just differences. You can expect two people two be equal – and especially not given a skill. I couldn’t just join the olympics team for swimming. And even if I trained as hard as them I have some physical problems (e.g. my funnel chest) which just reduces my breath capacity by 30%.

The last few weeks / months feel like catching up where I left. I thought about buying this book in 2009 and now I finally will read through it.

I think it’s an absolutely beautiful book. It’s full of wisdom. However, most of these practices are adopted – even if just partly, today.

XP designed for a team of 2-10 software devs

In contrast to typical software engineering projects with 250+ people.

“How would you program if you had enough time?”

I love this. It focuses on the idea of quality, craftsman ship and being proud of your product. I think this idea can be applied to any commercial creator activity – writing, graphic design, etc.

The driver of a software project is the customer. If the software doesn’t do what they want it to do, you have failed. Of course, they don’t know exactly what the software should do. That’s why software development is like steering, not like getting the car pointed straight down the road. Our job as programmers is to give the customer a steering wheel and give them feedback about exactly where we are on the road.

Constant feedback, customer-driven and design. I love his absolute statement: If you don’t solve the customer’s problem you have failed.

We will be successful when we have a style that celebrates a consistent set of values that serve both human and commercial needs: communication, simplicity, feedback, and courage.

Early production needs a little explanation. One of the strategies in the planning process is that the team puts the most valuable stories into production as soon as possible. This gives the programmers concrete feedback about the quality of their decisions and development process that never comes until the rubber meets the road. Some programmers have never lived with a system in production. How can they possibly learn to do a better job?

100% agree. People have to see the product even if it’s just some scribbles on paper. Seeing is believing. Showing that something works or doesn’t work is more convincing that almost every argument.

XP says to do a good job (tests, refactoring, communication) of solving today’s job today and trust your ability to add complexity in the future where you need it.

That’s my modus operandi for years and it works superbly well. Especially if you can deliver a solution which is might do less than some other one but will be more cost-effective. Customers love that.

And why not? Most customers aren’t in the software business but in the X business (where X isn’t software). They want their problems solved.

The difference is between playing to win and playing not to lose. Most software development I see is played not to lose. Lots of paper gets written. Lots of meetings are held. Everyone is trying to develop “by the book,” not because it makes any particular sense, but because they want to be able to say at the end that it wasn’t their fault, they were following the process.

I would argue that that’s in inherently cultural issue. A typical blame culture. It’s drives by applying blame instead of taking responsibility. It’s a culture driven by fear.

This is one of the main insights I took from this book. Work with the people not against them. I think I quoted that later but Kent Beck says that you need to reward the short-term payoff. You have to work with the ‘natural form’.

Some folks really like this about XP, that it celebrates what programmers seem to do when left to their own devices, with just enough control to keep the whole process on track. One quote I remember was, “XP matches observations of programmers in the wild.”

It doesn’t seem so at first but writing code when you have working tests is beautiful. It’s so much easier. I think Beck wrote this in this book but I can’t remember which one it was. But the basic gist was the the dev got legacy code and wrote the tests first before editing any existing code. I think that approach is pretty awesome. It makes one so much more comfortable writing and editing code.

I found this rather interesting. I didn’t have a read about the influence of work space on team performance so I can’t add that much value. However, I’ve seen some problems myself and I saw how fast a good team can detoriate if people are separated by simply a door.

Do only the planning you need for the next horizon—At any given level of detail, only plan to the next horizon—that is, the next release, the end of the next iteration. This doesn’t mean that you can’t do long-range planning. You can, just not in great detail. You can cover this release in great detail and cover the next five (proposed) releases with a set of bullet items. Such a sketch will not lose much over trying to plan all six releases in detail

Skin in the game.

The next paragraphs are mostly quoted from the book:

But there are some absolute showstopper that prevent XP from working—big teams, distrustful customers, technology that doesn’t support graceful change