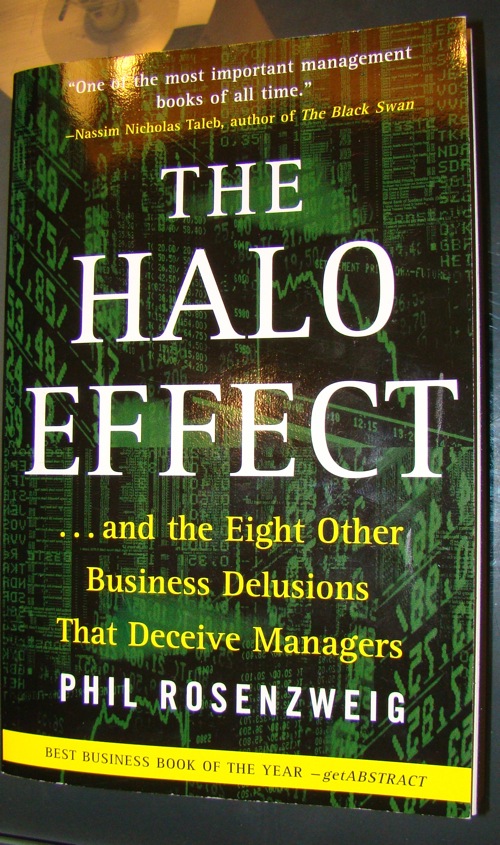 The Halo Effect talks about business (research) fallacies. The book is extremely insightful and if you like to learn more about fallacies in business, this book is the right for you.

The book starts to talk about management failures and especially practicing core competencies. Often the definition of a core competence is rather fuzzy it isn’t clear where they begin and end. However, in retrospective it can be rather easily defined as “core competence is where success was” – this fallacy can easily lead to decisions which are more motivated by randomness than by action.

A rather interesting observation is that baseball managers, industry analyst, etc. often say that you need to be both: e.g. be innovate and be conservative – saying this is like saying nothing. It doesn’t matter. And it isn’t the only problem. People don’t like randomness – however, a lot of things are influenced by randomness. One prominent example are stock market movements.

Rosenzweig attributes success of companies, like Wal-Mart, in their scientific rigor which doesn’t longer depends on gut feeling and more on data. Wal-Mart was among the first retailers that studyed pattern in consumption and actually applied that knowledge to their operations. The same methodology is used by successful internet companies, like amazon or eBay.

There were some studies in the military where generals rated soldiers subjectively – often they looked if the men where handsome, had a good posture or polished their shoes nicely. However, these weren’t indicators for being a superior soldiers. It was just the Halo effect: thinking that being good in one thing means that you are great in an other (Thorndike). The same fallacy was told in Moneyball.

One recent study, by Benjamin Schneider and colleagues at the University of Maryland, used a longitudinal design to example the question of employee satisfaction and company performance to try to find out which one causes which. […] Financial performance, measured by return on assets and earnings per share, has a more powerful effect on employee satisfaction than the reverse.

Anita McGahan at Boston University and Michael Porter at HBS set out to determine how much of a business unit’s profits can be explained by the industry in which it competes, by the corporation it belongs to, and by the way it is managed. This last category, which they called “segment-specific effects,” covers just about everything we’ve talked about in this chapter: a company’s customer orientation, its culture, its human resource systems, social responsibility, and so forth. […] McGahan and Porter found that “segment-specific effects” explained about 32 percent of a business unit’s performance. The rest was due to industry effects or corporate effects or was simply unexplained.

Delusion of Connecting the Winning Dots:
Peters and Waterman studied a sample made up entirely of outstanding companies. The scientific term for this is sample selection based on the dependent variable — that is, based on outcomes. It’s a classic error.

Foster and Kaplan wrote: “The last several decades we have celebrated big corporate survivors, praising their ‘excellence’, their longevity, their ability to last.” But companies that last longest usually aren’t the best performers. Enduring greatness is neither very likely, nor, when we find it, does it tend to be associated with high performance.

Add together these three factors – uncertain customer demand, unpredictable competitors, and changing technology – and it becomes clear why strategic choice is inherently risky.

Successful companies aren’t “just lucky” – high performance is not purely random – but good fortune does play a role, and sometimes a pivotal one.

I utterly enjoyed The Halo Effect – it is full of business research and shows how it fails or can fail. The three most important lessons are probably:

It was a bit long but insightful. I would recommend the book to everybody who is interested in business research or is active in management or as a consultant. Recommendation!