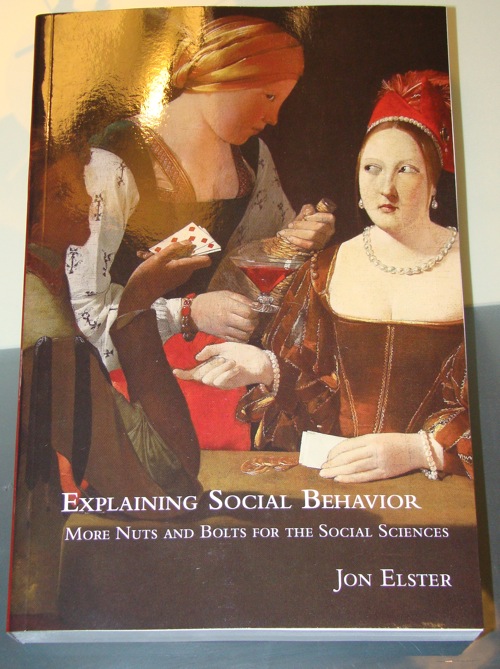 The first chapter is generally about explanations in science and more particularly in the social sciences. Elster emphasizes that just-so stories are often not enough. Imagine a story where someone didn’t go to college because he didn’t knew that he could. Does this explain why? No, we should ask why he didn’t knew that he could go to college. The author presents different theories about social science and comes back to them later.
Often mechanisms are used to explain behavior, he argues that outcomes are more important than the internal mechanism. E.g. if people behave with bounded rationality then this doesn’t mean that they calculate utilities for each choice but that they behave in a way that is similar to the prediction made by the mechanism of bounded rationality. There are several other mechanisms, like cognitive dissonance, loss-aversion, reference dependence, etc. The field of behavioral economics covers them mostly today.
The last chapter of the first part talks about interpretation and explanation. Elster argues that the basically the same. E.g. in interpreting a text, one explains its intent or the behavior.

The second part talks about the mind. The authors distinguishes between two types of motivations. There is wanting something, i.e. with the aim to put effort into fulfilling the want and wishing something, i.e. without the aim to put effort into the wish. This is quite interesting and he uses this definitions to argue why people don’t achieve what they planned to achieve because they only wished it not wanted it. Furthermore, there are different kind of requirements of motivation, i.e. general interest, reasoning, e.g. I want a good job therefore I should learn things and passion.

The second part talks about self-interest and altruism. He discusses the view, that I take, that all action is based on self-interest, e.g. altruism is based on an internal want to feel good about oneself. Secondly, there is the great mechanism of reciprocity, i.e. if somebody helped you, you will probably help him in the future.

Myopia and foresight go into the process of motivation for longer time horizons. Planning is in important process which is often underestimated. The characteristic of discounted value or utility is important there. If somebody values the present much stronger than the future, they will be reluctant to give up present utility for future utility. Here comes the weakness of will into play. Elster argues that weakness of will can be explained either by wishful thinking or temporary change in motivation or change over time.

The second last chapter in this section talks about beliefs which are a important topic in behavioral economics. A interesting observation is that experts do often worse than simple statistical models in decision making. I wrote about Atul Gawande who introduced check lists into surgery with phenomenal results. Or I read about using decision charts for classifying deceases which also worked better than a group of experts.
Secondly, there is the big field of biases. Some biases are regression to the mean, i.e. over time a deviation to the mean will move toward the mean. One study which ignored this was about air pilots. The researchers tested if praise and punishment helps to learn better. They praised the pilots if they done well and punished them if they didn’t. Often pilots did worse after they were praised – the researchers thought that it was because of the praises but it was just the regression to the mean, i.e. naturally the couldn’t do well every time.
An other biases is the availability bias, i.e. people see things that just happened as more important. You can see this for example that after a flood more people will buy a insurance and it will slowly decay over time. There are tons of different biases. The RSOAP created a neat file which includes lots of different cognitive biases.
Other belief mechanisms are magical thinking, i.e. you act as if you can influence the outcome but you can’t and rationalization, i.e. you make up a story to explain your behavior ex-post.

The last chapter in this part covers emotions. Generally, emotions influence actions but they decay quite fast. I.e. emotional behavior, e.g. attacking someone because of rage can be controlled if you just take the time to calm down.
An interesting aspect is rationalization of emotions. Elster presents the following example: Somebody envies his neighbors’ car, but he learned that envy isn’t good. Therefore he rationalizes that his neighbor got his wealth/car by immoral means because if he wouldn’t he would realize that he could have got the car if he learned more or worked harder but so he hasn’t to.
An other interesting, and quite famous fallacy in economics, is the sunk-cost fallacy. That is, somebody continues a unprofitable activity instead of accepting failure and doing something profitable. You probably heard it lots of time, e.g. “we invested $20m into this project, we can’t just let it die” or people who are continuing their career although they rather would do something else. The interesting trait of this fallacy is that it becomes worse in time.

Action is also often depended on situations. E.g. people can be talkative at work but be rather silent at home. Elster takes this to explain why kids are often so different at school and at home. Furthermore, he takes the stance that character is often more local than global, i.e. response is situational.
The next chapters talk about rational choice and rationality. Generally, rationality is subjective, i.e. each one’s utility is composed of different parts but we are constrained by costs, i.e. search cost or more general transaction costs and opportunity costs.
He talks about some paradoxes, e.g. voting or the lawn-mowing paradox. That is, that a person would let his lawn mowed by someone else for $x, but also wouldn’t mow an other’s lawn for more than $x. This can generally attributed to loss aversion.

The last chapter talks methods that help dealing with this irrationality. One is adding penalty a priori, e.g. if you eat more than two bars of chocolate you aren’t allowed to watch TV. Empirically, this doesn’t work so well. An other is adding premiums a priori which is just the other side of the coin.
One interesting method is eliminating choice, i.e. just buying one chocolate bar.

The second to last part talks about links between behavior and evidence from natural sciences.
Elster talks about experiments where animals got rewarded a treat for different behavior. In one case the animal got one treat after X times pushing a trigger and the alternative was a machine where you got randomly treats. Interesting enough, the mice favored the latter and it was harder to unlearn. He argues that people and animals try to find patterns and people often think that they see patterns and try to activate a trigger although it was purely random.
An interesting application was natural selection as a mechanism for providing rationality. One example would be competing firms in a market. In the long run only the rational firms will survive, i.e. the mechanism indirectly filters the outcome.

The last part talks about interactions. Elster takes a whole chapter about unintended consequences which is easily one of my favorites topics. I wrote a bit about the topic so I will just talk about the hog effect which, at least, I observe quite often. The hog effect is that future change isn’t anticipated in forecasts. One example is the increase of cigarette taxes in 1993 in Germany. The gov forecast that the tax increase will increase overall tax dramatically. Instead the consumers smoked less, switched to other products which weren’t affected by the tax and some companies created cigarette-like products which didn’t fall under this tax. In the end, the tax increase dramatically lowered the overall tax income.

An other interesting topic is that of trust. Generally, trust is incredible important in human interaction. He talked about the interesting case of diamond merchants which is a quite small community and they are relying heavily on trust. E.g. for them a verbal agreement is as good or better than a written one.
If trust is broken, then in general and of course in the diamond merchant community, ostracism will follow.

Elster points out that social norms are often not rational and can be harmful. One example is the need for mediocrity in some communities which destroys success of people. Or the mistreatment of homosexuals in the past and in some communities today.

The last chapter talks about collective belief formation which is quite interesting. One rather well-known study analyzed the drinking behavior of college students and found that most students drink more than they would like because they think others want to drink more. That leads so a too high level of drinking, also each one individually would drink far less. This is called pluralistic ignorance and basically says that nobody believes in X but everybody thinks that all other people belief in X.
Therefore, you can often see snowballing of non-conformism. That is, if enough people are non-conform than other non-conformists aren’t afraid anymore and present themselves also as non-conformists.

All in all, I really enjoyed this book. It’s a bit lengthy in parts but utterly interesting. I especially liked that Elster uses
proverbs and excerpts of novels to explain behavior which makes it more lively. I think it’s a must-read if you want to learn more about social behavior and is great if you (want to) work as a economists, social scientists or similar.