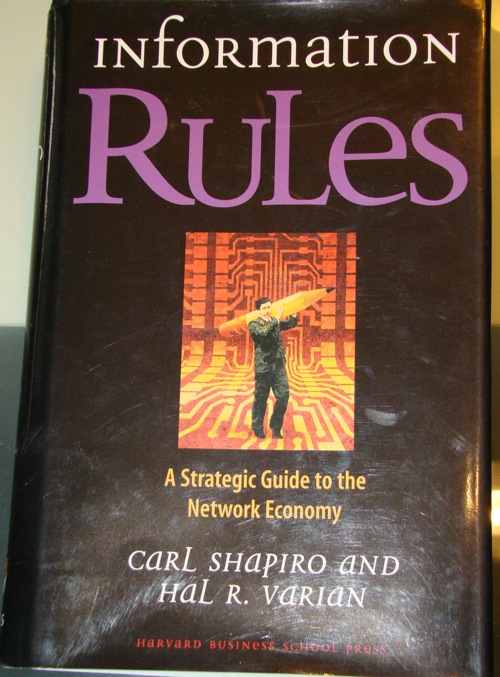 I want to try out a new format which you could call “book commentary”. I’ll quote some text passages and write a short comment about each passage.

Technology changes. Economic laws do not. If you are struggling to comprehend what the Internet means for you and your business, you can learn a great deal from the advent of the telephone system a hundred years ago.

This is a great advice and I can anybody recommend to read old books about business and economics especially case studies. I already covered some old business books myself here on the blog and I’m always receptive to recommendations.

We think that content owners tend to be too conservative with respect to the management of their intellectual property. The history of the video industry is a good example. Hollywood was petrified by the advent of videotape recorders. The TV industry filed suits to prevent home copying of TV programs, and Disney attempted to distinguish video sales and rentals through licensing arrangements. All of these attempts failed. Ironically, Hollywood now makes more from video than from theater presentations for most productions. The video sales and rental market, once so feared, has become a giant revenue source for Hollywood.

Interesting enough, Hollywood is still trying to fight against piracy. The next step would probably be to offer cheap versions as a stream (ala netflix). However, people don’t want to pay too much for a video stream.
I think it may be comparable with the automotive industry in the beginning of the 20th century. There were lots of car manufactures that produced really high quality cars which were really expensive. Most people couldn’t afford a car at this time. Then came the Ford Model T, which wasn’t as fancy at these other cars but it was cheap and good enough and people bought it.
Maybe Hollywood should think about producing movies which don’t cost $200m but instead only $20m.

A very interesting observation with great effects. This makes PR much more important than I thought it would be. Especially, if you apply to to startups. Signals like founding and investors become stronger. And it isn’t so much about the product and more about connects, strategic networks, PR and marketing.

The dominant component of the fixed costs of producing information are sunk costs, costs that are not recoverable if production is halted. If you invest in a new office building and you decide you don’t need it, you can recover part of your costs by selling the building. But if your film flops, there isn’t much of a resale market for its script. […] Sunk costs generally have to be paid up front, before commencing production.

We’ve seen some movies which ran horribly in the cinema but great in DVD markets. So, there’s some recoverability. However, the movie can still suck. One method to cover the costs are upfront investments. Kickstarter is basically allowing this for a mass-market and some game studies took this approach to produce games which wouldn’t be backed by a publisher (see Doublefine Adventures).

The key to reducing average cost in information markets is to increase sales volume. Think of how a TV show is marketed. It’s sold once for prime time play in the United States. Then it’s sold again for reruns during the summer. If it is a hot product, it’s sold abroad and syndicated to local stations. The same good can be sold dozens of times.The most watched TV show in the world is Baywatch, which is available in 110 countries and has more than 1 billion viewers. […] The shows are cheap to produce, have universal appeal, and are highly reusable.

Basically the Hollywood argument I made above. Lower the production costs but produce more variety and stimulate more innovation.

This is really important for the customer. You don’t want to feel that you paid the normal price for the inferior product. One example are some games which come with lesser content in the normal version but still costs $50-60. Don’t do that.

The coupons are worthwhile only if they segment the market. A coupon says “I’m a price-sensitive consumer. You know that’s true since I went to all this trouble to collect the coupons.” Economist say that a coupon is a credible signal of willingness to pay. […] What does this have to do with information pricing? Well, suppose that information technology lowers search costs so that everyone can “costlessly” find the lowest price. This means that sales are no longer a very good way to segment the market. Or suppose that software agents can costlessly search the net for cents-off coupons. In this case, the coupons serve no useful function.

I found this passage quite interesting. Basically sites like Groupon are too easy to use, so that people don’t segment themselves that good. Furthermore, there are lots of sites which offer coupon codes, so that today a sale for most online shops is probably more appropriate.

The rights management strategy is a twist on the versioning strategy described in Chapter 3. There we argued that you should offer a whole product line of information goods. The cheap versions (which can even be free) serve as advertisements for the high-priced versions.

Freemium described over 12 years ago. Interesting enough, McAfee used a freemium model since 1993 and before that they used a “pay what you think“-model, which was also quite revolutionary for that time.

Of course, a new brand can emerge that is easy to learn, thus reducing switching costs. Indeed, one strategy for breaking into a market with significant brand-specific customer training is to imitate existing brands or otherwise develop a product that is easy to learn. Borland tried this with Quattro Pro, aimed at Lotus 1-2-3 users, and Microsoft World has built-in, specially designed help for (former!) WordPerfect users.

We’ve seen this in the online market quite recently, e.g. with WordPress and tumblr. I wonder if you see a better word processor in the future.

What happens when perfect competition meets lock-in? […] Think about the extreme case in which you face fierce competition from equally capable rivals to attract customers in the first place. Both you and your rivals know that each customer will be locked into whatever vendor he or she selects. The result is that competition indeed wrings excess profits out of the market, but only on a life-cycle basis. The inescapable conclusion: firms will lose money (invest) in attracting customers, and (just) recoup these investments from profitable sales to locked-in customers.

Normally, you would assume that lock-in leads to excessive profit in a market but it doesn’t. You can talk about quasi-profits, i.e. the lock-in needs negative investment at the start and if you locked-in a customer, he will return the investment costs over his life-time. That is, if you want to make excessive profit, you have to still rely on product differentiation and/or cost leadership.

If you give your product away, anticipating juicy follow-on sales based on consumer loyalty/switching costs, you are in for a rude surprise if those switching costs turn out to be modest.

That’s when freemium goes wrong. If you are in a market with low or non-existing lock-in costs, i.e. trash mail provider or image uploading sites, freemium probably won’t work.

I really like this idea. Often you see introductory offers, like 20% off of the subscription but after this period, you either don’t care about the price, feel ripped-off, because you have to pay more or cancel your current account and get another introductory offer.
However, if you reward long-term customers with some useful addons, they have no incentive to do the latter and probably will appreciate the extra addon. Varian and Shapiro talk about this in the book in greater length.

The beautiful if frightening implication: success and failure are driven as much by consumer expectations and luck as by the underlying value of the product. A nudge in the right direction, at the right time, can make all the difference. Marketing strategy designed to influence consumer expectations is critical in network markets.

See the quote above. Early adopters are really important and early press coverage can greatly introduce the probability of success.

The authors quote Grove’s 10X as a revolutionary metric. I got two nice examples which fit to this quote.
Firstly, Google+ which hasn’t offered a 10X and wasn’t a evolution of Facebook either. Furthermore, the group in the beta phase was too small.
An other example, are open source clones of proprietary products. More often than not, free source code or enhanced privacy aren’t 10X.

In addition to launching your product early, you need to be aggressive early on to build an installed base of customers. Find the “pioneers” who ware most keen to try new technology and sign them up swiftly.

All in all, I really liked this book. I think it’s probably a must-read for internet entrepreneurs. What I personally found really interesting to see which people endorsed this book and one of them is Eric Schmidt (Google’s ex CEO). And he said in an interview about Google+ and its chance to beat Facebook: “It’s very hard to beat a fast-moving incumbent in exactly same game in technology because it changes so quickly.”

If you are interested in more detail about the content of the book, its website offers free presentation material for college courses. Great book, great writing.

by Tony the Misfit

I’m back. I wrote my last post about two years ago (16th May 2009) and now I’m once again back on the road. I don’t really know what will be on this blog but there will be some content. Probably I start another “The C Programming Language” solution series. Maybe I do some simple web security stuff again. I’d like to write a bit about the things which occupied me in the last two years: statistics, game theory and economics.

Furthermore, I will probably post some cool stuff I saw online.  By the way, I’m quite impressed by the new standard WP theme. They dumped the blue one and created this beauty. Nice work. Also I like that they deleted these deletion dialogs and replaced them with undo buttons. That’s it for now. Bye!

Yes, I returned to WordPress. There are several reasons. Firstly, I was too lazy to convert WordPress themes to s9y (my previous blog software) and I wanted to try out the new version of WordPress. I’m astonished. The installation is easier than it was in 2004, and even then, it was foolproof. The UI is very intuitive and simple.

I’ve blogged about lot of things from cyberpunk to privacy. Like at my first blogs I don’t want focus strictly on one or two topics. I’ll blog about topics that interests me. I don’t care if it’s an interesting statistic, a provocative philosophy or a funny movie.