One of my super short reviews on the books I read in my My Way to PHP series.

The Pragmatic Programmer by Dave Thomas and Andy Hunt

I read the book the first time in 2008 and wondered how good the content was. Back 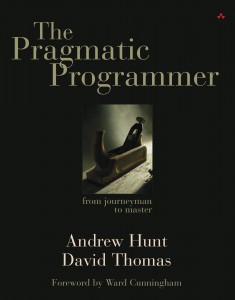 then I was delighted by the book. My background then was some PHP programming and it was my first confrontation with professional software development.

Six years later and my opinion about the book changed. I think it is still a good read for a new programmer but not so much for someone with some experience. Most of the stuff is integrated into the culture. It’s a bit like watching Airplane. You heard the jokes before. Not because somebody made them before Airplane but because you’ve seen a lot of comedy movies which reused those jokes.

Also there’s a lot of fluff in the book. I would probably recommend to read a summary or something like that.