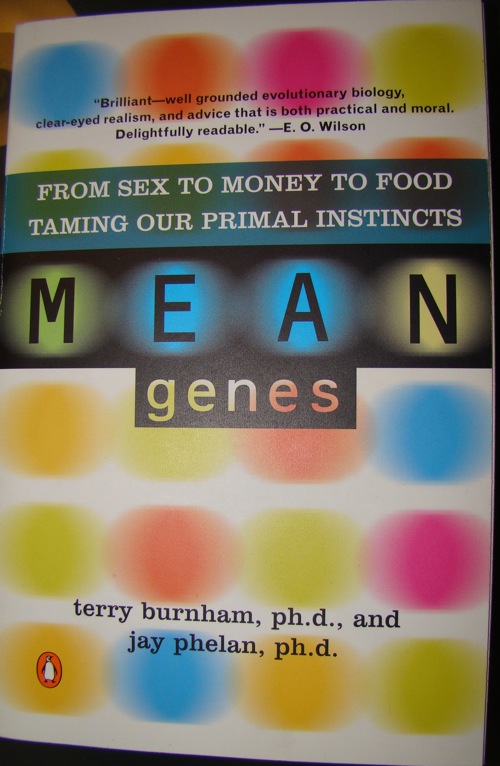 I picked Mean genes up because a book about behavioral economics recommended it. Let’s see what we can learn from it.

The !Kung San’s behavior provides the clue to resolving the paradox between Americans’ chronic undersaving and the strong evolutionary pressure to prepare for lean times. In a world without refrigerators or banks, preparing for hard times means eating enough food to store some fat on your body.

Many of us would survive, albeit unpleasantly, for more than two months without a single morsel of food.

In this context our genes work quite well. We consume as much as we can and are prepared for hard times. Luckily, however, is that they aren’t so common anymore in the developed world.

One method for limiting overspending is to pay in cash rather than with debit. However, the cure to limit overeating is not not eating enough.

The authors describe an experiment in a Biodome where people weren’t allowed to eat enough. This are the results:

On their sparse diets, the Biodomers also argued constantly, go into ugly food spats, and frequently squabbled over dinner portions. After leaving what they dubbed “the hunger dome”, one of the eight said, “If we ever all start talking to each other, that would be a major accomplishment.”

You probably experienced something like that if you are hungry. You are less happy, tense and short-tempered. How about our ancestors?

Of these types, who has the biggest surplus of energy stored in their thighs and buttocks when food is scarce? Who weathers the famine with calories left over for reproducing? Who is most likely to be your ancestor? Fatties, fatties, and fatties again.

What can you do to lose weight?

As expected, some of the new drugs work and others fail, but here’s the strangest finding: people in the placebo groups always lose weight. […] But here’s the trick: while those who take the placebo aren’t using drugs, they are keeping track of their weight and are more aware of what they eat than usual.

Just like in business: You can’t control what you don’t measure. And even just measuring something helps making it more prevalent. You can see the same behavior if people start looking at their energy consumption.

Laziness is good for most animals. To understand this, we have to leave our couches and think like wild primates. Energy in the form of food is hard to obtain, and once gotten, not to be squandered.

Let’s rejoin our mice who hate running. While it’s hard to get them to jog frivolously, they do love a good run under the right conditions. For example, if they are hungry, they spend a good part of the day running. Why? Well, among other things they are looking for food.

Laziness is good because you don’t have to burn energy but using energy is good if this gets you more food.

The subjects were also asked to keep diaries of all their eating on the days around the cookie-fest. Those in the Nutrasweet group [fake sweetener] ate more than those who ate the sugar cookies. So much more, in fact, that the total caloric intake of the two groups was identical. Moreover, those in the Nutrasweet group preferentially ate more sugar.

This is an interesting observation. It seems that, at least for sugar, we eat at much as we need.

Isabella’s messed-up enzyme is called aldehyde dehydrogenase, and fully half of Asian people have the same genetic mistake. But hold on. Perhaps we ought to call this mistake a molecular godsend. In a study of thirteen hundred alcoholics in Japan, guess how many were fast-flushers? Not one.

Is addiction in our genes?

While genes have thus been shown to play a role in smoking, drinking, and the use of other drugs, we have clear evidence that genetic factors are not the whole story. Identical twins show similar — but not identical — propensities for drug use. IF a person has a problem with alcohol, and identical twin is 25% – 40% more likely than a fraternal twin to exhibit the same behavior.

Not completely, but the best strategy is not to try drugs. Especially, if you have a family history of addiction, you should avoid them as best as you can.

There’s a drug named Anatabuse which helps fight alcoholism. Does it work?

Anatabuse seems perfectly designed to foil alcoholism. Most studies conclude, however, that it is of minimal help in treating alcoholism. How can that be? Take a look in the user’s bedroom or garbage or toilet. Stories abound of alcoholics who flush their daily pill down the toilet or “”cheek” it, only to deposit it later.

Again. Even with medicine helping fight addiction, the addiction is hard to fight.

Imagine two types of humans, those who cowered in their caves and those who explored new areas. While many of the risk-takers died, those who gambled and won populated the entire globe.

Not only were our ancestors risk-takers, it also has an other effect:

Risky behavior stimulates the dopamine reward systems. Some people are born with systems that muffle the buzz they get from taking risks. […]

Our overconfidence even allows people to believe they might win the lottery. By creating such unrealistic beliefs, our genes goad us into taking greater risks than we might otherwise choose.

A common use of this information is the following:

Publisher’s Clearinghouse struggled for many years until it decided that instead of rewarding many entrants with medium-sized prizes, it would offer great prizes with tiny odds. As one executive recounts, “People don’t care about the odds, only the prizes.”

When it comes to happiness, the most common story is that happy children grow up to be happy adolescents who then become happy adults. The best way to ensure that we’ll be surrounded by upbeat people in the future is to be friends with happy people now.

Today, most super markets and other places with waiting lines implement this strategy. People like making progress.

We can start by recognizing the quirky ways our brain creates happiness and then capitalize on that knowledge. There are three important features of our genetic system. First, absolute levels have little effect on happiness. Second, we love making progress. Third, expectations play a central role.

Expectations are indeed important. For example, wine tastes are influenced by expectations. The same works for Cola vs. Pepsi. The best you can do is under-promise and over-deliver. Technically, you should read the lowest ratings of a movie only, then you won’t be disappointed or maybe even astonished how good the movie was.

Mean genes was okay. It’s written as a popular science book and lacks deeper insights. Furthermore, there are no notes in the book, only on their website. It’s a nice read but that’s it.