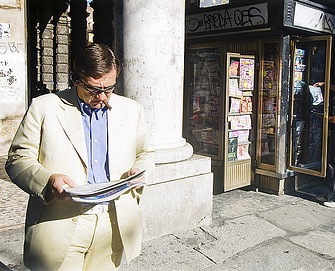 Managers. There are everywhere. In companies, in charities and at your local golf club. But what are managers? Or better what should they be?
Many managers see themselves as commanders not only because its suggested through books like “The Art Of War“. He orders, his team execute.

Today this doesn’t work well. It’s kind of obsolete. Managers should not only act as commanders they should also act as mentor.
His role is to collect and execute a general idea. For an optimal result it’s more than just commanding people (more at wikipedia).

So there are managers and specialists in a team. I think there should be only specialist in a team. A manager does need a same level of expertise as an “specialist”. A lot of narrations and theories prove something different. Many managers aren’t prepared for a management positions and some of them don’t see to be prepare at all. Maybe a two weeks “How to manage a team” workshop, but that’s it.

A software engineer must study further. A manager must study further. I don’t see any reasonable argument why managers should stop learning.
In many books which aren’t directly about management the authors rail against managers. It’s mostly because they aren’t well informed. Maybe they heard of some new and fancy technologies or methodologies but never understood them.

In conclusion, I think managers should have a solid base of knowledge which they should be improving as much as possible. Furthermore they should work with the team not against it.