I just browse hacker news a bit and stumbled upon a map of Berlin startups. Out of curiosity I looked at some of the websites. I’m surprised how bad most of these websites were executed. For this post I will take 7 randomly chosen startups and look at their landing pages. 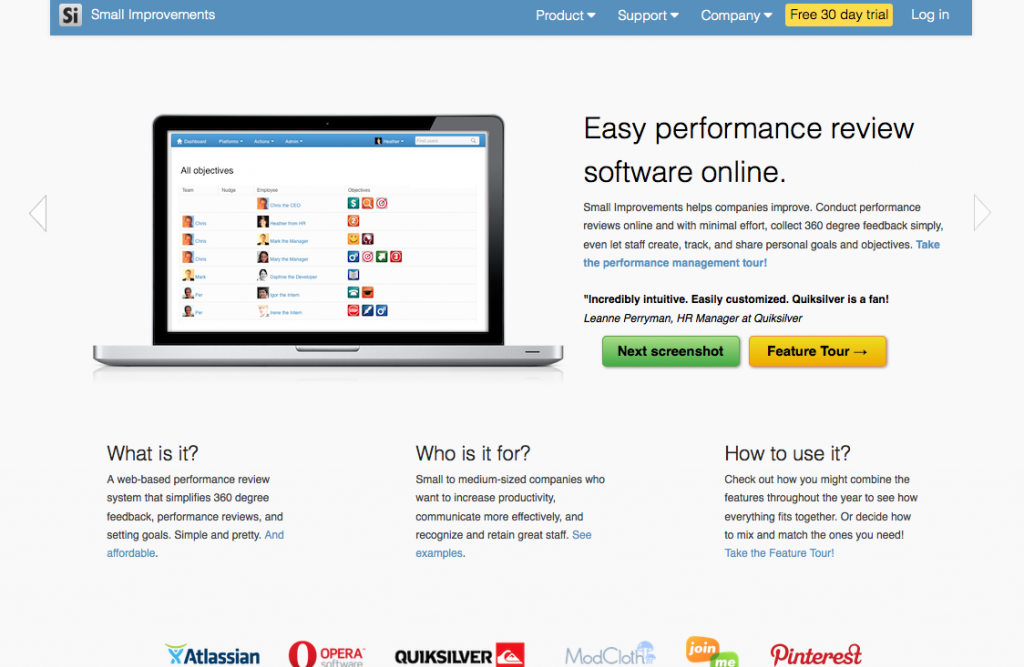 It seems that this startup offers a platform for performance reviews. I can’t see a benefit directly, besides that it is “easy”. In a quite small font-size they site presents that “even let staff create, track, and share personal goals and objectives.” – which I think is a pretty cool function. Still no benefit. “Next screenshot” as a CTA also isn’t ideal. Also the design is too gray in my opinion and boring. I think that’s what I get out of the site. It’s a boring tool for bureaucratic HR persons. They seem to have some good customers – so the product is likely quite good. 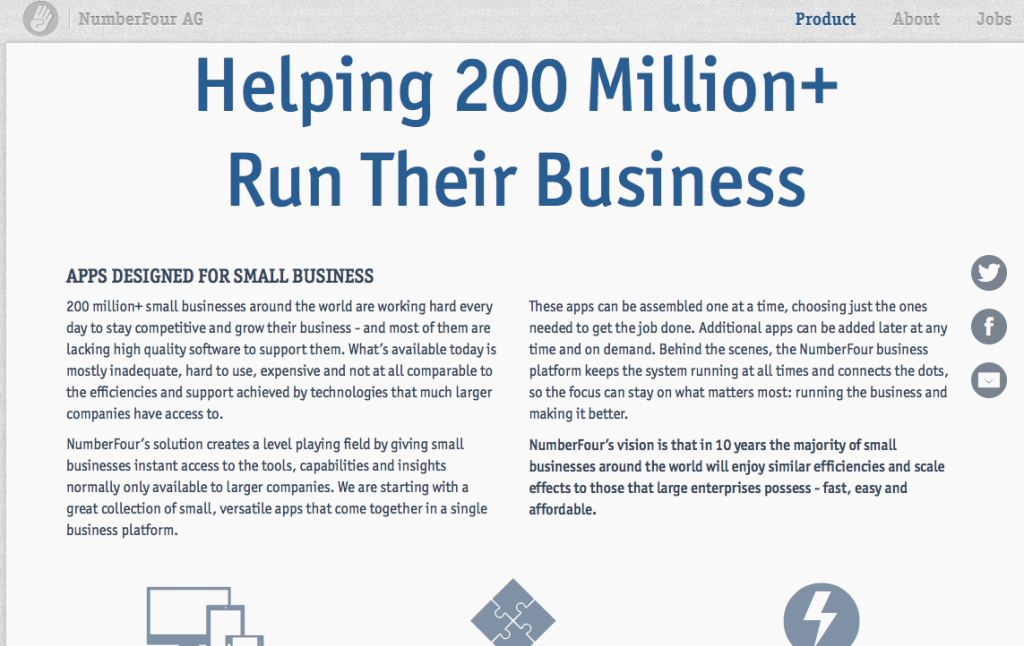 The first thing I see is that it is an AG which isn’t so “startup”-like. But whatever. The site looks good. But I have no idea what they are selling. There’s more about the founder and his investors than the product. Blegh. 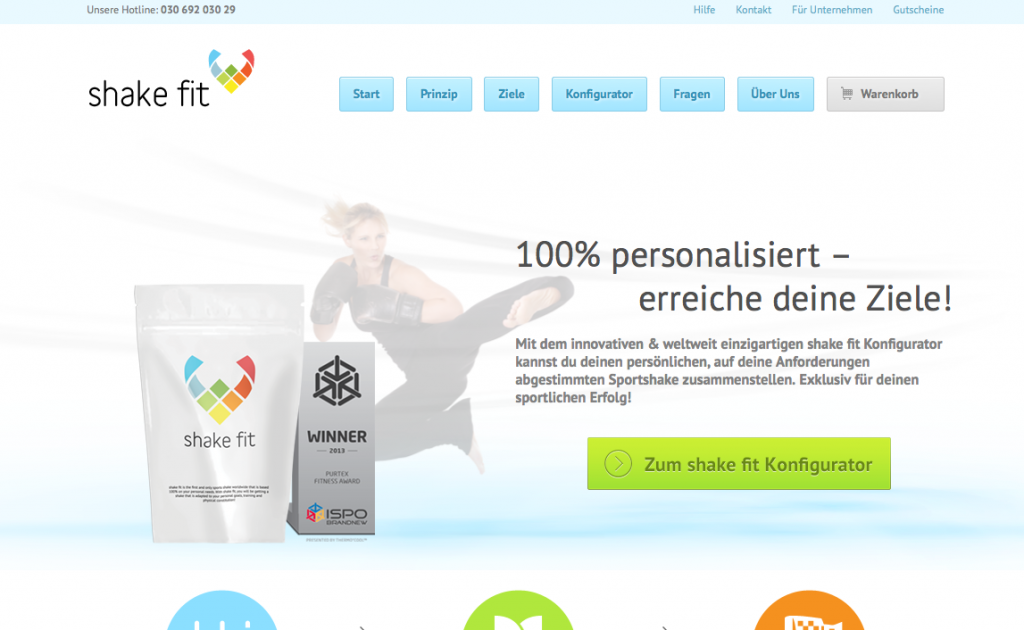 The website looks okay. The headline is crap though it says “100% personalized – achieve your goals”. They are selling a personalized protein shake. I like their configurator. All in all, pretty solid. Though I would changed the design a bit and change the headline.

Okay Trade-a-Game is now reBuy which isn’t a startup anymore. Skip – but I heard they are doing very well. 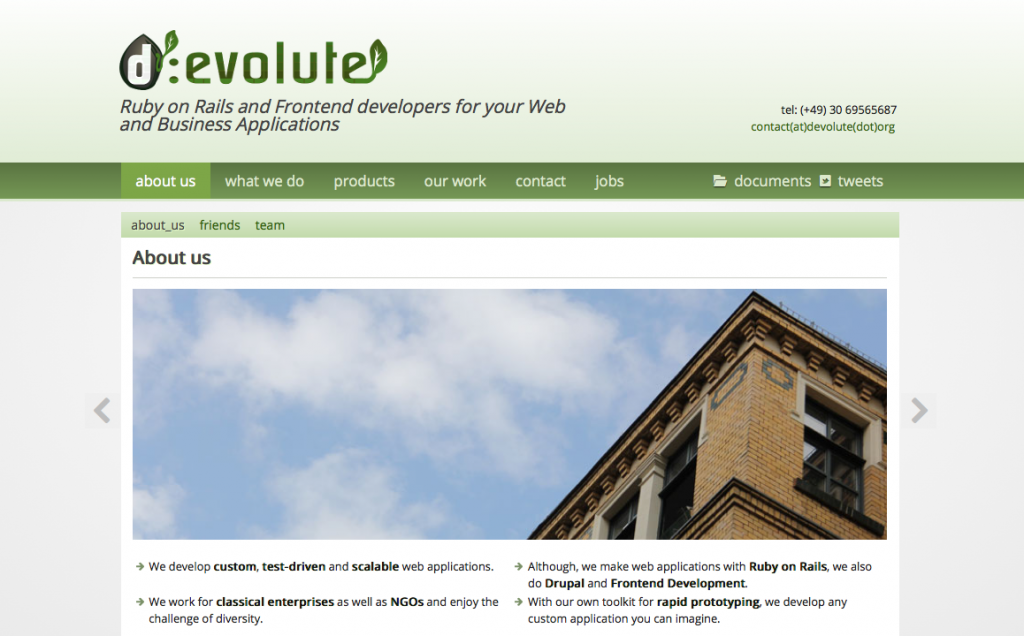 Okay. That isn’t a startup but a consulting firm or software shop. We should I begin. The design looks plain. The picture is meaningless. About us? I don’t know. No real benefits outlined. Their portfolio looks a bit better though it’s not really sold. Very technology driven. I don’t know their prospect base. I think they mostly speak to techies at the moment. If it works, good.

Another AG and definitely no startup anymore. Very enterprise-y but I think for this target group appropriate. 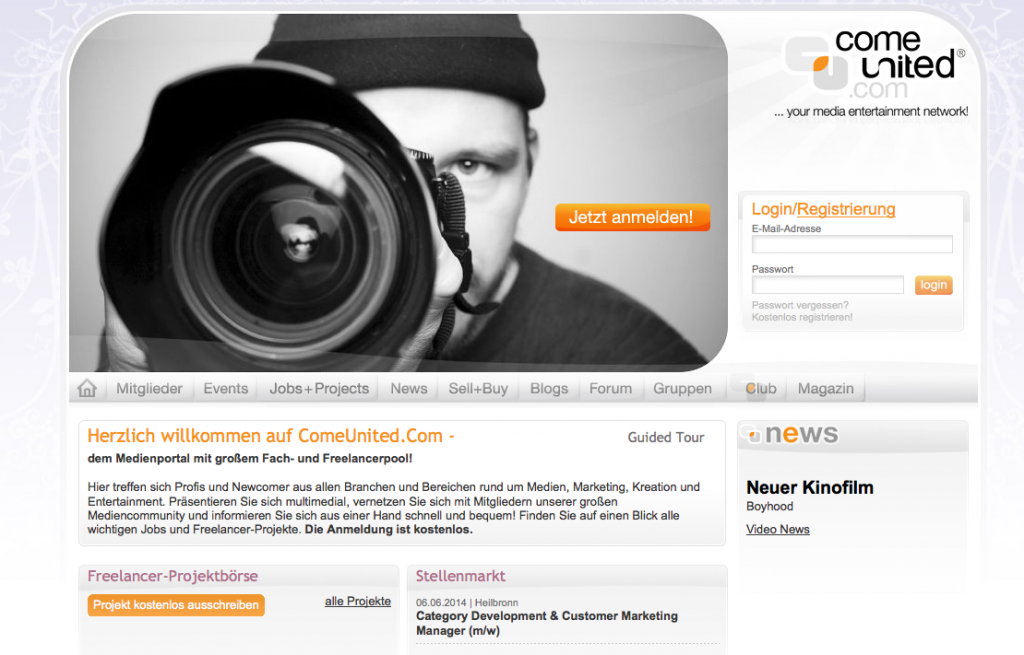 It seems like a social network for people in media. The design looks very old. No benefits. The CTA is semi-okay. I don’t think they longer exist. The last press release is from 2010, all the umlauts are fucked up. Seems like its dead.

I liked the presentation of shake fit the best. And I think d:evolute doesn’t need to be a startup. It’s pretty cool just being a small or medium-sized business. You don’t need to grow to 20k employees. Do your thing and stay real.

Today I just post a post I’ve written but I think people can profit from it. Enjoy.

You can advance the liberty in the world. How? Provide better alternatives. If you want to live on the frontier you must have the guts to do it. It’s nice to sit back and complain about all things in your home. Even better is getting out and doing something. I’m not talking about political action. I’m talking about entrepreneurial action.

I started my first business when I was about 15. Super simple, people had problems with their computers, I knew a bit about computers, they came to me with their problems and I fixed it. Made about $50 to $100 per customer.

A few years later I sold books, DVDs and CDs on amazon. Started with my own stuff, later family and friends of my family asked if I can sell theirs too. I just took a margin of the price when the product was sold and handled shipping and complaints. Easy money.

I don’t have any money

This is bullshit. You don’t need 500k to start a business, you don’t need investors, no VCs, no angels. There are pretty awesome methods out there to start businesses on a shoestring budget. Even easier I give you a few business ideas which you can start with under $100.

I can understand that these businesses sound boring but you will learn how businesses work. Secondly, they just work and make you money. There’s a lot less risk involved. If you have a great idea for a tech startup, start small. Build a great website – you can do this easily for under $100 bucks – and start testing your idea first. Get it on the market and let the market decide. You don’t need any programming skills up to this point. Build a mailing list for prospects. If you think you get enough (do some realistic projections) – start building your app. Again, start small. Solve the biggest problem first. I worked with a ton of different startups and mostly do it wrong. I worked with one startup who had superb PR, had about 12-20k visits per month and made about $200 per month. How? Their product was terrible, nobody wanted it. They invested over $250k in the company and three years later they were bankrupt. If they changed their product, but stayed in the same niche, they could easily have made $20k+ per month in sales.

Provide better alternatives. This doesn’t have to be your first business. Rather start accumulating resources first (knowledge, connections, money) and then advance your cause. If you can do both in this step, great. This step won’t be easy but there’s a lot less resistance than you think at first. A lot of self-employed people (not the super rich) don’t really like the gov or the “establishment”. You basically have two routes:

Let’s start with the latter because it’s shorter. Easy example for a better interface is a tax adviser. He’s a middle-man but his services are so valuable that you decide to hire him. This sector is pretty big and includes lawyers, labels, publishers, etc.

The former option is more interesting, however more risky. Some great examples are crowd funding instead of running to angels or VCs. Publishing platforms like Amazon instead of negotiating with publisher. Video platforms like Youtube instead of begging for a TV time slot.

Look around and list all the big corporations or government functions:

Take a deeper look at each one and understand the bigger problem they are trying to solve. Find ways to solve it with modern technology. For example, bank giving out loans? Why can’t people give out loans directly? P2P lending platforms.

You are going to start small, even if it isn’t that small but the forces from the gov can be pretty harsh – see P2P lending platforms or prediction markets. A great way around is using crypto currencies. You won’t destroy the gov but you can replace each part of it.

Elements of a great headline:

Here’s an other great headline:

Profits that lie hidden in your farm

Persuade people to grasp this advantage

„If a salesman neglects to make a good close he can make another call. But a “poor-closing” or a “nonclosing” advertisement makes an ineffective visit to every one of its prospects.“

Be specific, keep it simple and easy

When Gatti-Casazza, the famous opera impresario, asked the composer Verdi for advice regarding the duties of an impresario, Verdi told him: “Read most attentively the reports of the box office. These, whether you like it or not, are the only documents which measure success or failure and they admit of no argument and represent not mere opinion but fact. If the public comes, the object is attained; if not—no! The theater is intended to be full and not empty. That’s something you must always remember.”

How long copy should your copy be

Use vivid present tense, singular instead of plural. Make it al- ready happen to him as he reads. Jim Young once said, “To get a man to do a thing, let him see himself doing it.” For example, from an airline advertisement: “You left the East Coast at one o’clock after an excellent lunch. Now, stretched out in a big, cushioned easy chair, you watch cloud patterns shift on the green and gold checker- board of the farmland below.”

These are just a few ideas on how to let look a copy shorter:

As Gilbert K. Chesterton said: “There is no such thing on earth as an uninteresting subject; the only thing that can exist is an uninterested person.”

Yet many advertisements virtually say little more than “Hello— Our product is wonderful—Good-by.”

How to get more inquiries

How to get less

Do copy appeals have a sex?

The hard-boiled attitude – and how to acquire it

Pretty awesome book. I can recommend to grab a copy and work through it.

I’m currently reading How to write good advertisement by Victor Schwab and he quotes this poem which is pretty good. Enjoy. 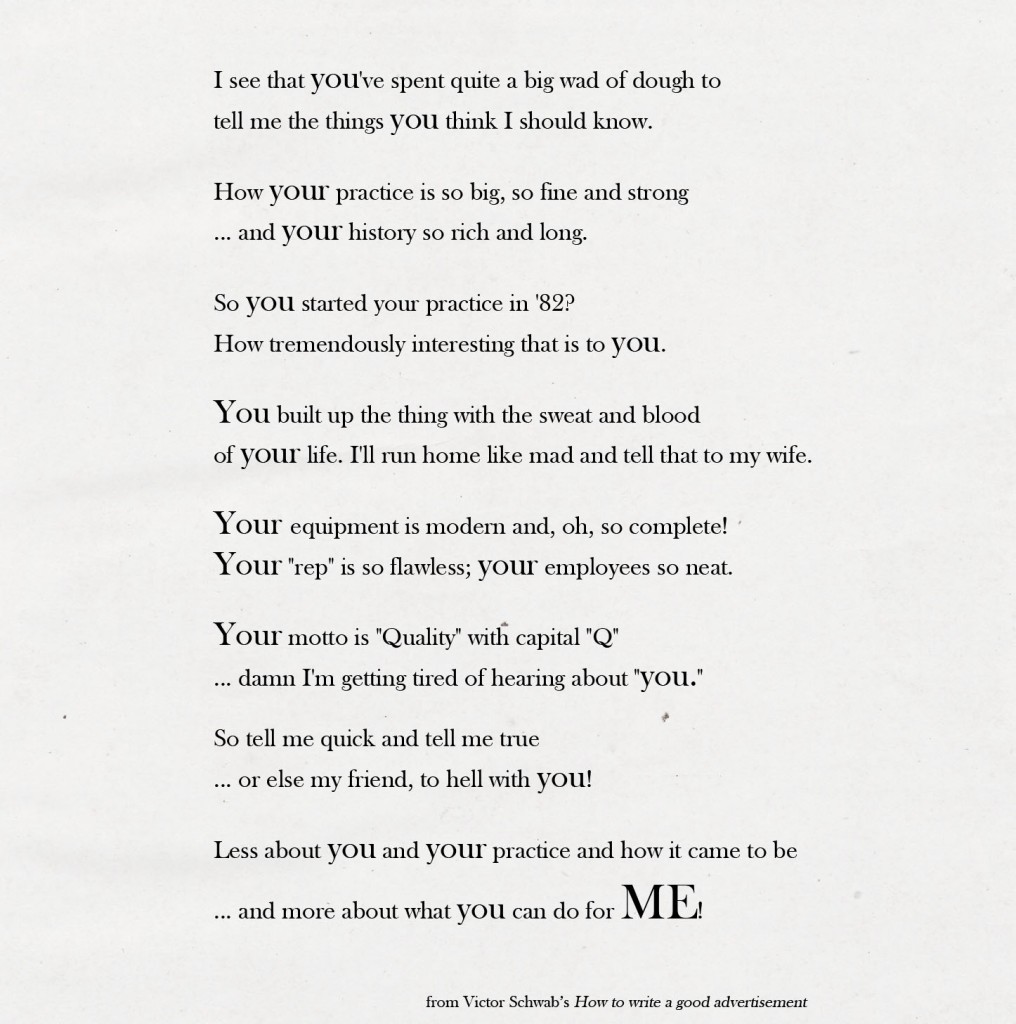