Solution I made this example to simplify the process of reconstructing the binary tree. 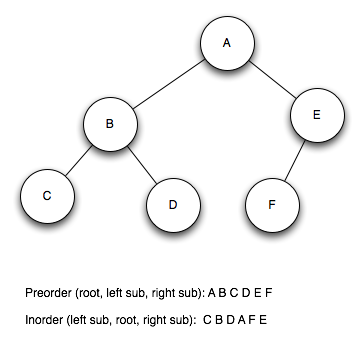 for initializing the matrix and the loop needs

5-9. Suppose an arithmetic expression is given as a tree. Each leaf is an integer and each internal node is one of the standard arithmetical operations (+,−,∗,/). For example, the expression 2 + 3 ∗ 4 + (3 ∗ 4)/5 is represented by the tree in Figure 5.17(a). Give an O(n) algorithm for evaluating such an expression, where there are n nodes in the tree.

5-18. Consider a set of movies M1, M2, . . . , Mk. There is a set of customers, each one of which indicates the two movies they would like to see this weekend. Movies are shown on Saturday evening and Sunday evening. Multiple movies may be screened at the same time.
You must decide which movies should be televised on Saturday and which on Sun- day, so that every customer gets to see the two movies they desire. Is there a schedule where each movie is shown at most once? Design an efficient algorithm to find such a schedule if one exists.

Solution We can model this problem as a graph problem. Each node is a movie and each edge (x, y) represents a person who wants to watch movie x and y. 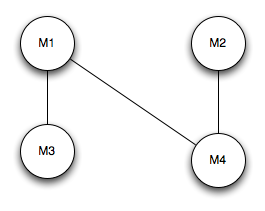 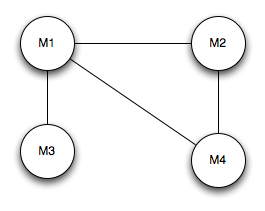 Our last schedule doesn’t work anymore because movie 1 and movie 2 are screened on the same day. We’re looking for a bipartite graph which is discussed early in the book.

5-23. Your job is to arrange n ill-behaved children in a straight line, facing front. You are given a list of m statements of the form “i hates j”. If i hates j, then you do not want put i somewhere behind j, because then i is capable of throwing something at j.
Give an algorithm that orders the line, (or says that it is not possible) in O(m + n) time.

Solution We can save us a lot of time if we model the problem correctly. 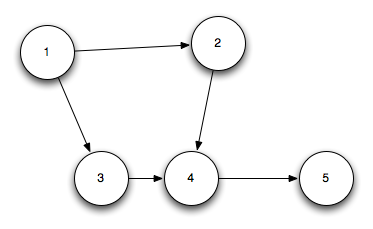 In this example 1 hates 2 and 3, 2 hates 4, 3 hates 4, and 4 hates 5. You can see that we can use topological sorting for this problem which is also described early in the book.